It has been on my heart for some time now to provide a way for the individuals in our congregation to consider the voices of those who rarely are heard. My desire in the hearing of these voices, is that our listening would be guided by the truth that each one of these individuals is an image bearer of God. Pastor Matt Menzel, on many occasions over the past few months, has referred to four characteristics which reflect the heart of God—characteristics which we, as Christians, are called to. He has also suggested that the expression of each characteristic is intricately linked to those living in particularly difficult circumstances. I would like to use these characteristics and descriptive circumstances to guide this series:

Being the mother of a child with cognitive impairment, my eyes have been opened most widely to the reality of those who are undervalued in our world. When I think about those in our culture who are perceived this way, I only have to walk out my front door to see that those who are regarded as less than (whatever it is we hold as most valuable), are those individuals with disabilities, those living in the later years of life, those battling mental ill-health, and those wracked with the onslaught of bodily disease. Having written previously on Down Syndrome, I wanted to start this blog series sharing how another important individual in our congregation, who—given that he “fits” the description of the elderly—is one of the undervalued, bright image bearers in our city. His name is Jack.

When I write that Jack “fits” the description of the elderly, I include quotation marks to indicate that while this man’s age fits the description, his heart displays the vitality of a young man filled with love, humour and hope. Jack Summerfield, a Vancouverite since 1935, lives in East Van, just off Main Street with his wife Beth of 52 years. They have two daughters and four grandchildren. 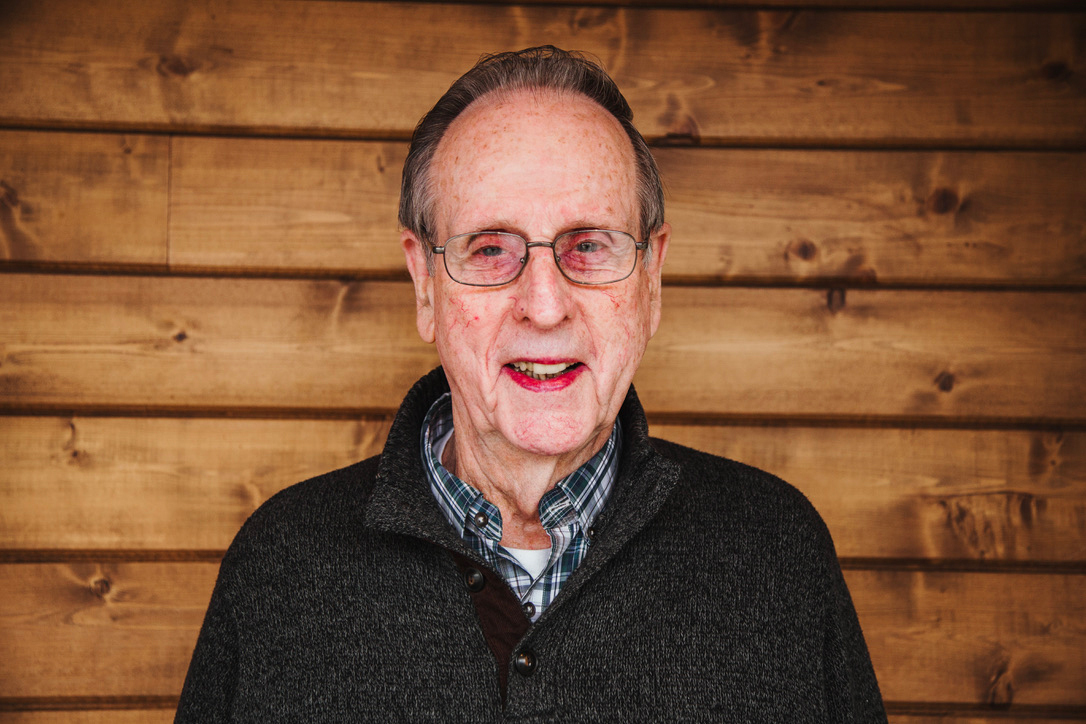 As we settle in to talk about what it means to be created in the image of God, Jack—who volunteered at the Union Gospel Mission for 61 years—begins talking about how difficult life has been, both for those in the thralls of addiction, and for himself. As he begins to talk, a smile breaks out across his face, “I don’t mind the struggle, if out of the adversity God comes through in powerful ways… God is always working.” From the onset of our conversation, I get the sense that this man, who I rarely see without his hand grasping a Bible, has valuable insight to share from years of living in this broken world. Jack goes on to share an image with me, one that has helped him in his work at the UGM: “I think most of us believe that life will get easier. . . but when you get down to the docks, the cruise ship you’re looking for is nowhere; instead, you see a warship. After boarding the ship and getting over the shock of not boarding a cruise ship, you begin to travel. You walk around on the warship, get to know it, and then eventually, you go up on deck—only to realize, you haven’t even left the dock!”  As Jack thinks through this image, he says, “In response to the question you sent me, ‘What discourages you the most from living in the truth that you are created in God’s image?’… It’s that the progress is so slow, and the difficulty so huge. You must swim against the current, or you drift with it, and up into the Strait of Georgia. Then you don’t know where you are! It reminds me of Abraham, ‘God, where are you taking me?’ The Lord brings him back to Bethel. If you lose sight of where you are going, what the will of God is for you, you must go back to where you knew the will of God.”

Together, we consider this truth. If we are all created in the image of God, then His will is for us to bear His image with our lives. How do we understand this, given that we are broken, sinful human beings who find ourselves boarding warships or floating down large channels of water? Jack responds with tears in his eyes, and explains that it starts with Jesus: “To see the image of God reflected in Jesus, is completely overwhelming to me . . . And because of the cross, His grace and grace alone, I can see His image in me.” He takes a breath and continues, “Is this really true?” Jack pauses, clearly touched by the incomprehensible reality of what Scripture tells us, “Yes, it is… I’m reading through the book of John right now, and we see it there as well: chapter 4, the woman at the well, chapter 5, the man who wants to be healed from 38 years of sickness, chapter 6, the little lad who was willing to give Jesus his lunch, and the blind man in chapter 9.” Each one of these unique individuals presented to us in the Gospel of John displays the image of God. Each man, woman, and child was created, valued, and loved by the One infinitely wise and good God. I resonate with the deeply grounded expression I see on Jack’s face—it is simply amazing! The truth is, that our circumstances do not inform our identity, God does. He created male and female in His image (Gen 1:26-27), and the grace that is lavished upon us as we accept the sacrifice of Jesus on the cross, for our sins, enables us to increasingly live out that image, in the midst of our circumstances (Gen 1:26-27, Eph 1:7-8, Col 3:1-17). 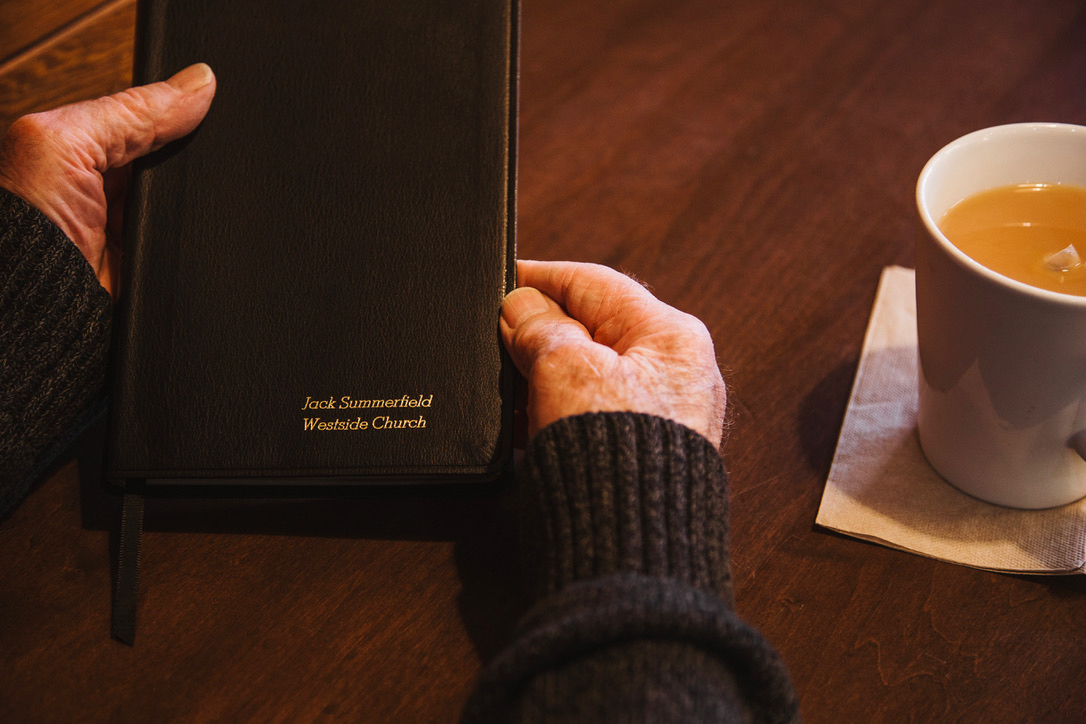 As we continue to reflect on what it means to live as an image bearer of God, Jack recalls the book and TV series called Roots. Although he admitted that he couldn’t watch it, due to the graphic violence, he did see a scene once, where a slave owner was shown brutally dragging a slave: “In this scene, another black man saw what was happening, and ran out to help—I want to be that man. I’ll run right for the oppressed.” Jack goes on to share how an event that occurred before he was even born, greatly influenced him toward living with compassion: “Before I was born my grandparents moved to Galiano Island. They lived very close to their neighbour, but there was a fence in between the properties. My grandfather’s neighbour wanted to get the property surveyed to know where the property line was. Grandpa said there was no need, he was fine with where the boundary was set. The neighbour insisted. A surveyor came, and revealed that the property line went right through the neighbour’s kitchen! My grandfather insisted that his original offer still stood—he was fine with the fence line.” Unlike the slave owner who oppressed the slave, unlike the neighbour who in his pride dug up his house and moved it to the official property line, and unlike the volatile father Jack briefly mentions—who made him feel like a stranger in his own home—Jack has progressively chosen to live out of the image God bestowed upon him.

Ultimately, the image shining through each struggling individual—and each man, woman, and child who extends their hearts and hands to help—is that of Jesus. At a very basic and powerful level, we are all created as human beings loved by God, and created to love Him and others. This is where I briefly get Jack to speak about himself (which is a task, as this is a man who sees himself as nothing worth discussing, in comparison to His Lord). The answer to my question, “Where do you see the image of God reflected in your own life?” begins, as it should, with reference to worship: “I see it in the simplest ways, yet they are so profound—in magnifying, extolling, and uplifting the Lord Jesus.”  One of the ways Jack sees himself living this out is by simply asking, “Lord, is there some way I can share your love with those I meet?” One such encounter came at a bus stop, where he regularly crossed paths with the same woman. Jack felt prompted, upon seeking the Lord, to say, “Good morning!” And so he did. The woman turned her back. The next encounter, which provided another opportunity for Jack to say, “Good morning!”, produced a barely audible sound in response. The third morning greeting finally elicited a “Good morning” in return: “It was 6 weeks, however, until I would see her again. The next time I saw the woman I asked if she was ok. She told me she had been deathly ill. I told her that I had been praying for her. ‘You? Were praying for me?’ she asked.” In this series of simple human interactions at a bus stop on Cambie, Jack displayed the image of God to a stranger.

If you are an early riser, and partial to good local coffee in East Van, you might run into Jack at JJ Bean on Main Street. Jack confesses, “I really enjoy the opportunity to go to JJ Beans in the mornings and make it most every day rising at five, except when we have other appointments like the doctor”. He sits at the same table, one that has a good view of the door, so as to provide Jack the opportunity to see individuals coming in, and the individuals to see his Bible, “which makes for mostly great conversations.” One of the less than favorable conversations he had was with a man who, clearly having observed Jack in his regular spot, asked, “Do you own this table?” Jack responded, “Yes! In fact, they are going to put my name on the wall. . .  but first, I’d like them to increase the wattage so I can see better!” I smiled, imagining how the man in JJ Bean must have been surprised at how his accusatory question was met with the kind wit of this elderly gentleman. Jack continues, “I told him, ‘Everybody needs light in their life. I’d like to tell you what the greatest man on earth said, “I am the light”’—he cut me off and the conversation was over. What I wanted to share with him, was that Jesus says, ‘If you follow me, you won’t walk in darkness’, but he didn’t get to hear that.”

As I listen to the earnest desire of this man, to live as the bright image God created him to be, my heart is encouraged and I am challenged to be more prepared to display the light of Jesus in my life.

My hope in this conversation with Jack is to provide an opportunity for Westsiders to hear the voice of an elderly man who today, at 84 years old, images Jesus. As we listen, I pray that the witness of Jack Summerfield would both encourage and enlarge our hearts.

Jodi Adrian currently spends her days counselling with the Biblical Counselling Group, caring for her family, co-leading CG with her husband Pastor Jer, and getting outside any chance she gets!